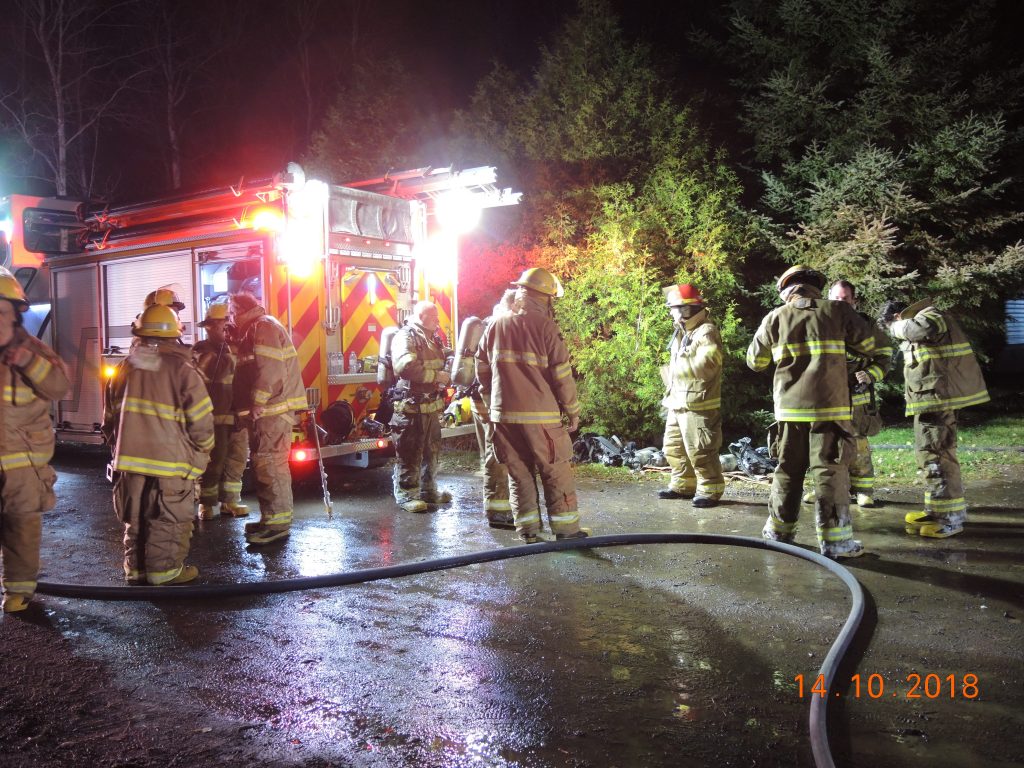 Shuniah (October 14, 2018) – At approximately 2:15am on Sunday, October 14, 2018, Shuniah Fire & Emergency Services (SFES) responded to reports of a fully involved structure fire in Longhouse Village on Lakeshore Drive in the Municipality of Shuniah.

First arriving crews reported fire and heavy smoke in the rear of the mobile home. Firefighters quickly knocked the fire down, but extension in the roof and floor made overhaul long and challenging. The fire was declared extinguished at approximately 3:45am. Two adults, one toddler, one baby, and two pets made it out safely, and have been connected with the Thunder Bay Red Cross Disaster Assistance Team to assist them with shelter, clothing, and diapers for the family.

The initial investigation revealed that the mother woke up from the crying baby and found the trailer full of smoke, triggering everyone to evacuate. The smoke alarm was found to be disabled due to frequent nuisance alarms from shower steam. The carbon monoxide alarm activated as the occupants were evacuating the structure. The cause of the fire remains under investigation and charges are pending.

Fifteen SFES firefighters in seven fire apparatus and one Superior North EMS unit responded to the call. All SFES units were back in service by 6:30am.

While no one was injured in this incident, it could have had a tragic ending. SFES would like emphasize that smoke alarms save lives and should never be disabled as it puts your family at risk and it is against the law to do so. Using the right type of alarm in the appropriate areas will reduce the number of nuisance alarms. We encourage anyone with questions about, or having issues with, their alarms contact their local fire department rather than disable it.

Permanent link to this article: https://shuniahfire.com/2018/10/media-release-family-escapes-fire-uninjured/